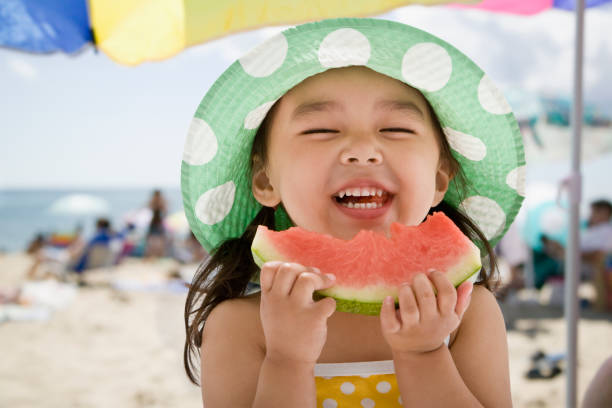 Watermelon is a must, especially on those hot summer days… So refreshing, so delicious, so good for your health… Wait, what? Yes, watermelon is not only great to cool you down and keep you hydrated on hot days but it also brings many different benefits for your overall health.

Let’s go through them…

What makes watermelon so good?

But first things first, what is that watermelon contains that can be so good for your health?

Well, other than its flavor, this juicy and delicious fruit has many different nutrients such as vitamins C, B, A and even potassium (yes, it’s not only bananas) and lycopene, a well known antioxidant which benefits have been proven over and over again, especially on our cardiovascular health.

With such a lower caloric and fat content (about 46 calories per portion), and a huge amount of benefits, there is no doubt why watermelon is a “must have” on your dish.

It keeps you hydrated

Duh! This is probably one of the main reasons that watermelon is known for (I mean, it is called water- mellon for something, right?), but just in case you didn’t know watermellons are about 80% water, so if you are one of those that doesn’t like drinking water, this fruit is ideal for you.

This property makes it a powerful diuretic agent, even more effective than furosemide, a well known diuretic drug often used by people with kidneys or liver complications. Best part of it is that to start enjoying its benefits you only have to drink watermelon juice!

Protects your heart and cardiovascular system:

What makes watermelon so good for our cardiac function is the L- citrulline, a non essential amino acid that our kidneys turn into L- arginine improving our heart, blood vessel health,  immune function and exercise performance.

This is now a well known fact. It has been proven that watermelon consumption reduces arterial stiffness and aortic blood pressure which makes it a good complimentary measure for obese individuals and/or for those struggling with hypertension.

According to this research, you could see the beneficial effects of watermelon after only 6 weeks, these results have been confirmed several times and have even linked L- citrulline (and watermelon) consumption to an increased tolerance to exercise.

The positive effects of watermelon intake also extend to other cardiovascular markers such as brachial and ankle blood pressure, confirming its  protective effect against increased cardiac afterload during physical stress, in the prevention of atherosclerosis development, and an overall improved arterial function.

This is mainly due to the lycopene, another of the important antioxidants watermelon contains, which has been linked to anti inflammation properties (and other amazing benefits that we will review afterwards). Just for you to have an idea on how potent the anti inflammatory effect of lycopene is, science has proven that is  equivalent to the effect of the popular dexamethasone, for example.

Although this property can be applied in the prevention and treatment of many different conditions, it has been tested and confirmed on the recovery from spinal cord ischemia injury, which often leads to surgeries, neurological deficits and related complications.

This is again due to the effect of lycopene, an agent often considered a key component responsible for the protective effects of many fruits and vegetables (tomatoes and papayas are also a huge sourcce of this nutrient).

Being such a powerful antioxidant agent, lycopene consumption has been proven to reduce the risk for cancer development.  Scientific evidence has shown that lycopene has a potent antitumor effects that can be linked to both a preventive and a therapeutic role for this compound; this is due to it quenching singlet oxygen, scavenging free radicals, and preventing the oxidative damage of DNA, and with it the transformation of healthy cells in cancer.

The recommended intake of lycopene is of 35 mg per day, which can be found in around two glasses of watermelon juice (refreshing, isn’t’ it?).

It has already been linked to metabolic diseases several times, confirming its beneficial effects on the way our body uses and stores energy, but is there a clear effect of watermelon intake on body weight?

The answer is YES! It has been proven that fresh watermelon consumption (2 cups of watermelon every day for 4 weeks) is linked to decreased body weight, a lower body mass index and waist to hip ratio (with all its parallelly benefits, such as lower systolic pressure and a higher antioxidant capacity).

Are you a bit overweight or working on that summer body? Watermelon is the answer!

Although further research needs to be done, it has been suggested that due to the vitamin C and lycopene that watermelon contains, it can be helpful to prevent asthma development by reducing exercise- induced bronchoconstriction (which is the mechanism by which asthma episodes happen) as well as the natural body’s reaction to colds and flu.

Funny enough, these are more common during the winter which gives you a perfect excuse to eat as much watermelon as you want all year long!

Again, due to its antioxidative properties, watermelon intake – specifically in the form of juice- has been proven to generate positive changes in some of the parameters that have been linked to diabetes development, such as body weight, blood sugar, and total protein level in the blood.

These results are promising and have been found several times, confirming the potential of watermelon to become an effective complementary treatment of diabetic symptoms, although the underlying mechanisms by which it works  are not totally clear yet.

Now that you know all the amazing benefits watermelon brings, then why waiting until summer to have a slice?

Practicing in multispecialty hospital and a freelancer.
Masters in clinical nutrition, hospital management and specialization in NEUTROGENOMICS counsellor and a certified educator.

Rules of a ayurvedic dosha balancing diet – The mind rules!